What are the best Arequipa tourist attractions for this season?

For your vacations in Peru, keep in mind Arequipa. Without a doubt, you will not regret it! This beautiful city is located in the desert mountains of the Peruvian Andes at an altitude of 2 335 meters above sea level and extends into an area of ​​valleys where majestic volcanic cones stand out, such as the Misti, Chachani, and PichuPichu.

Arequipa is known as the “White City”, thanks to the use of white volcanic stone (representative sillar technique), predominant in the constructions of its wonderful historic center and dating from the viceregal and republican eras. In the year 2000, it was declared a World Heritage Site by UNESCO. For Arequipeños, this award is their greatest fame.

A key point, before touching the theme of Arequipa tourist attractions, is the weather and it is because it has a very pleasant one throughout the year. Approximately 300 days of the sun together with temperatures that do not go up to 25 °C/77 °F and rarely fall below 10 °C/50 °F. According to rainfall and humidity in the area, it has two seasons: wet and dry. 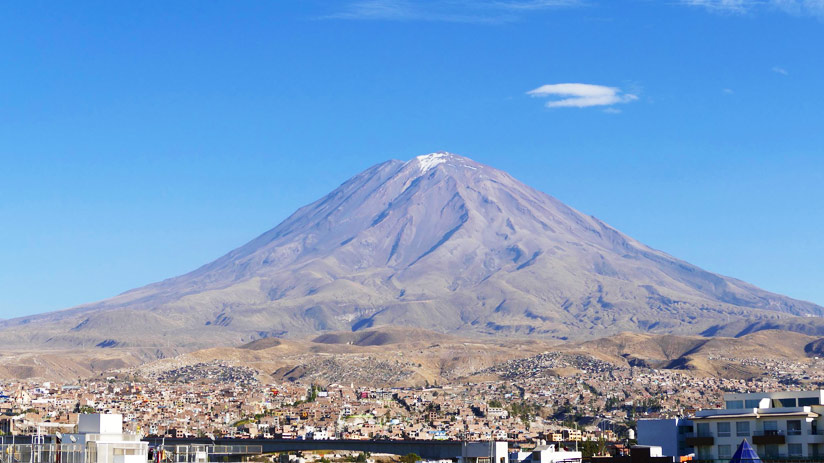 The summer, between December and March, corresponds to the Humid season, the one with the most clouds. Also highlighted by some rains, higher humidity and minimum average temperatures of 10 °C/50 °F and maximum averages of 20 °C/68 °F.

The winter, between April and November, corresponds to the Dry season, with very low humidity, no rainfall and summer-like temperatures that will seem colder, due to the dryness of the air.

However, the tourism score has favored the Dry season with its clear days. It is one of an incredibly blue sky! without rains and with maximum temperatures that go between 18 °C/64.4 °F and 25 °C/77 °F.

From this perspective, of the perfect season, come and feel invited to enjoy the best Arequipa tourist attractions. With your privileged participation, you intervene in their cultural heritage, ancestral customs, and traditions, heritage and nature reserves, as well as their great gastronomy.

We respond to some tips in two big questions, which you have surely considered:

What to do in Arequipa?

Best places of interest for things to do in Arequipa:

Place where the Nobel Prize writer of Peru was born and lived his first year of life. The tour includes 16 exhibition rooms of personal objects by Mario Vargas Llosa, with 3D projections and holograms.

Allows you to appreciate and experience the Alpaca because you interact with these animals in a beautiful natural environment, conceive the ancestral techniques for the classification of fibers and traditional weaving, and, at the same time, visit the only textile machinery museum in the country. Mundo Alpaca has the Mitchell Group factory shop and a boutique of the exclusive Sol Alpaca line.

Before finishing your trip, buy the classic chocolates from La Ibérica, they are a delight!

What are the best Arequipa tourist attractions?

Considered one of the most beautiful main squares of the continent. It is surrounded by imposing granite colonnades and three old churches from the colonial era: The Cathedral, La Compañía, and Nuestra Señora de la Merced.

The Main Square of Arequipa captivates both by day, with its hectic activity and numerous restaurants full of people under its portals, and at night when its majestic monuments are illuminated with orange tones. 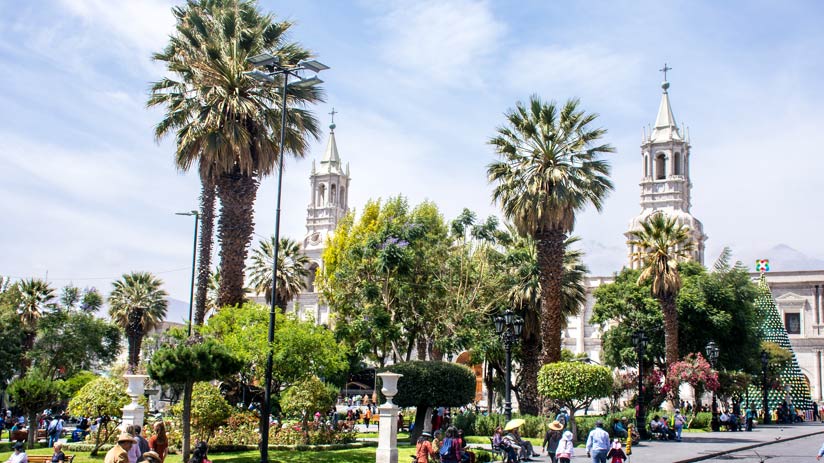 2. Church and Complex of La Compañía:

Jewel of religious architecture located on one side of the Main Square, it is a building built in 1590 that stands out for its white stone walls and superimposed reliefs that decorate its Baroque façade.

Although of less magnificence, it is also recommended to appreciate the lateral facade for its richness in reliefs and details. In the interior, the Chapel of San Ignacio stands out, which is a beautiful example of decorative art from Arequipa, with colorful ornamentation. Other attractions of the complex are the two cloisters on the back. 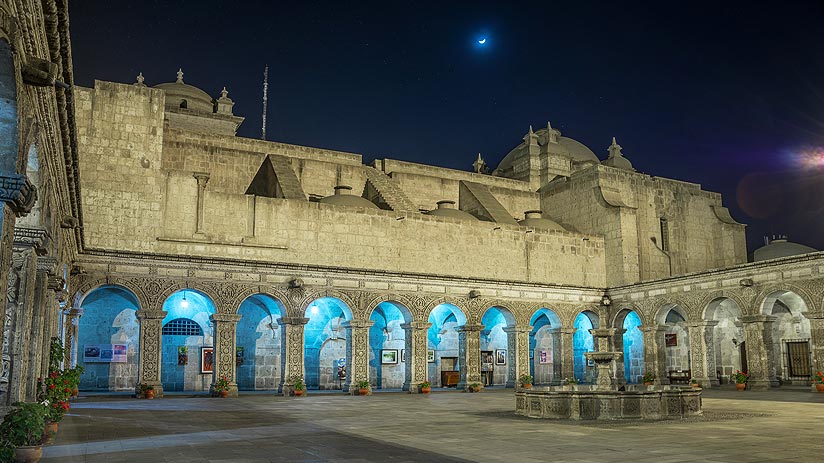 The oldest in Arequipa and located just 500 meters from the Plaza de Armas. The area of ​​small squares is magical, narrow streets with black cobblestones, surrounded by architectures white ashlar, and from whose walls hang pots of geraniums and street lighting.

Inside its narrow alleys, sites such as Callejón Violin with its characteristic entrance arch, Callejon Cristales with the absence of sidewalks, Callejón Bayoneta with its narrowness, and Callejón Combate Naval, where the Plazoleta de Camporredondo with its simple Church of Tres Campanas stands. 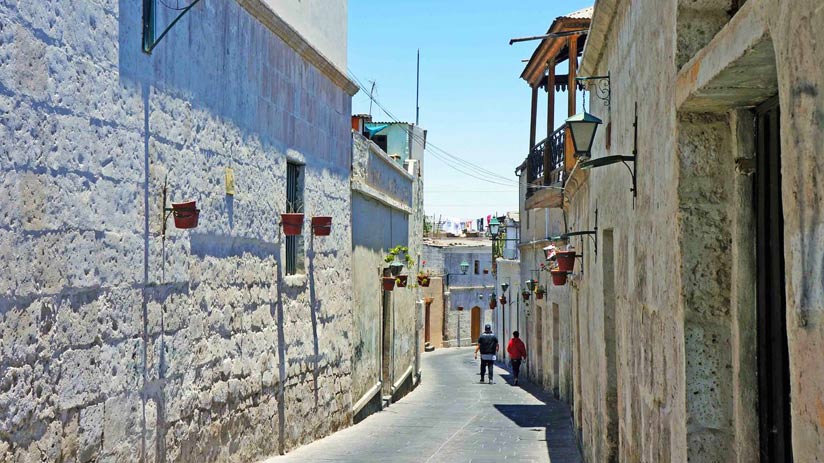 A true citadel, magnificent among the Arequipa tourist attractions. This Monastery founded in 1579, was the convent of the nuns of the Order of St. Catherine of Siena. Its attractiveness of architectural beauty is considered the best reflection of the splendor of viceregal Peru. It is a work in white and pink sillar, set of narrow alleys surrounded by arcades, that open way between radiant courtyards, cloisters, gardens, squares and old facilities. 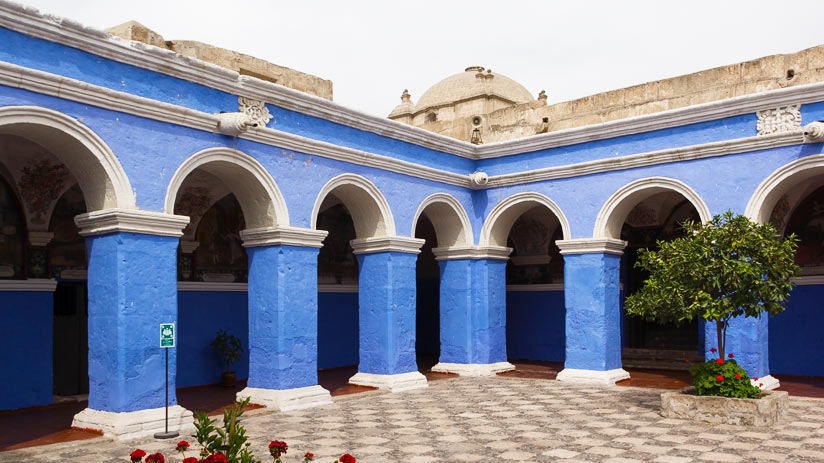 They correspond to various constructions built along the roads, from the period of the colony. A majority is a place of rest and replenishment among extensive commercial routes. In Arequipa, there were numerous areas like this, located around the Bolognesi Bridge, one of the access doors of the muleteers’ caravans that arrived in the city.

Today many of these structures have been recovered and restored, and serve as homes. Among them, the Tambo La Cabezona, the Tambo de Bronce, and the Tambo Matadero.

One of the Arequipa tourist attractions and the most famous. It houses the beautiful Mirador de Yanahuara, a terrace surrounded by stone arcades. It is the platform of spectacular landscapes of the White City and its three snow-capped volcanoes: Misti, Chachani and PichuPichu.

To visit it you must travel 2 km from the historic center of Arequipa. It is an ideal walk for the sunset, which can be complemented with a visit to the picturesque town, characteristic for its religious buildings, narrow cobblestone streets of Andalusian style and old mansions built with the sillar technique. 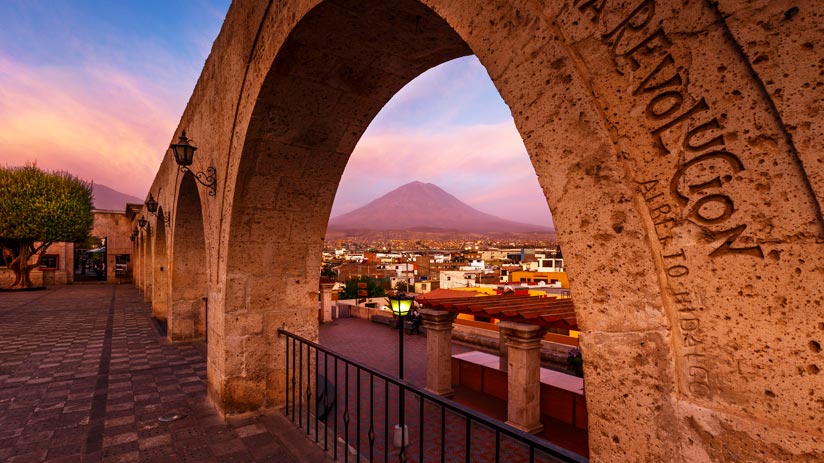 Nicknamed the Balcony of Arequipa, for the beautiful views towards the White City. It is a town in height, located 3 km from the historic center of the city, and recognized for the beauty of its colonial architecture. Emphasizes the old Church San Miguel Arcángel, the religious temple that hides jewels of the painting of the School Cusqueña, with a series of works of art of reasons related to the miracles of the Virgin.

Another of the tourist attractions of Villa de Cayma refers to the possibility of practicing adventure sports, such as rafting, kayak, climbing, and paragliding, among its natural landscapes of hillsides, streams, and rivers.

Known as the South Eastern Gate of Arequipa, it corresponds to a town located 8 km from the historic center of the city, characterized by its landscapes of countryside and slopes of crystal clear waters that emanate from the nearby volcanoes.

Its main tourist attraction is the Molino de Sabandía, a colonial monument that was the flour supplier of the city for centuries. It is a patrimonial work nowadays restored, that maintains white walls of sillar, vaults, gargoyles, and balconies. 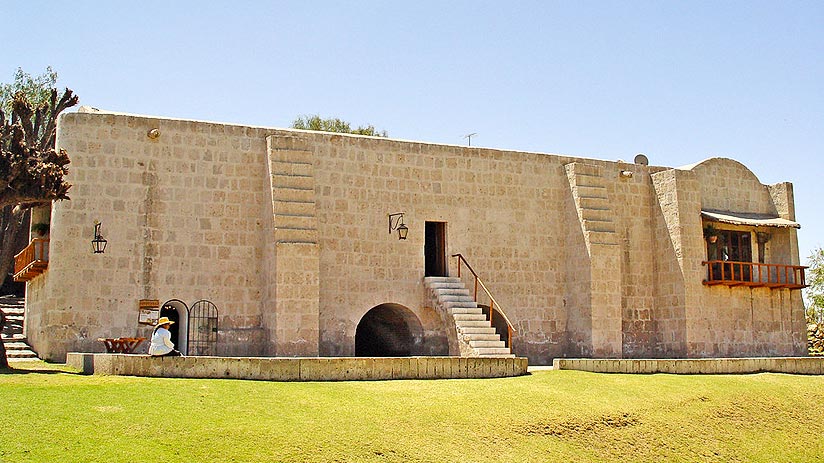 Jewel of natural heritage located in the vicinity of Arequipa, at an average altitude of 4 300 meters above sea level. It is an area identified by its landscapes that mix snow-capped volcanoes, lagoons surrounded by wetlands, Andean forests, and meadows.

Its most famous site corresponds to Laguna Salinas. It is a scenario of particular beauty configured from a salt of shallow waters and extensive wetlands that surround it. It is a true avifauna sanctuary that welcomes at certain times of the year near 20 000 aquatic birds, and they emphasize, among them, their famous flamingos that dye of colorful the waters of the lagoon.

One of the deepest natural canyons in the world is the Colca Canyon. The formidable excursion allows us to appreciate landscapes of the Altiplano (high plains), small colonial towns, archaeological remains and, most importantly, the spectacle of the flight of condors during the dawn, on the abyss precipice that reaches the canyon of 3 191m of depth.

To appreciate this natural wonder, you must travel to the Colca Valley located 165 km from Arequipa. Normally it is recommended to spend the night before in the town of Chivay, where the hotel offer of the area is concentrated; So to enjoy the formidable flight of condors the next day, you must be in the canyon during the first hours of the day. 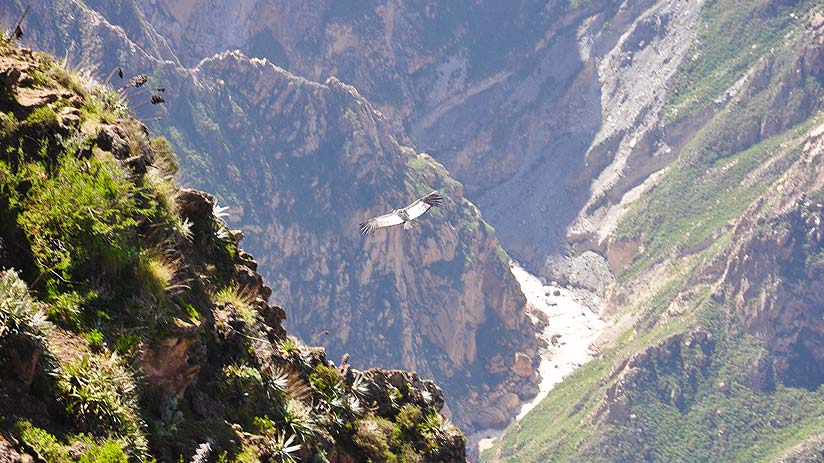 The Peruvian poncho can be seen all around the And