Peru is, without a doubt, one of the countries with the most tourist attractions full of mystery and ancient history. Among its numerous archaeological sites is one of the oldest cities made of adobe. We refer to the Chan Chan archaeological zone, one of the oldest places in Latin America. This ancient mud city is very close to Trujillo and is one of the main attractions around. Therefore, together with the travel experts of Machu Travel Peru, we want to tell you everything about the archaeological complex. Within this small article, we will take a look at this incredible place and its main characteristics.

Everything you need to know about the Chan Chan archaeological zone

Location of the archaeological zone 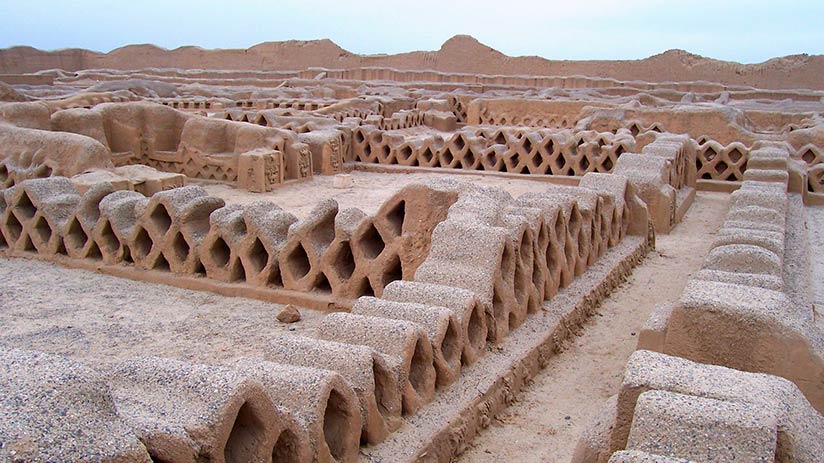 The Chan Chan archaeological zone is located in the Moche Valley, within the Huanchaco district, on the west side of the Peruvian province of Trujillo (North of Peru). The entire complex covers approximately 20 square kilometers and served as an administrative, commercial, and political center of this ancient civilization. This adobe city is located just a short 5 kilometers from Trujillo, so getting there is usually not a major problem. For this reason, to enjoy true tourism in Peru it is better to start by knowing the beautiful city of Trujillo, and when you feel ready, you can start your journey to Chan Chan.

A general view of Chan Chan 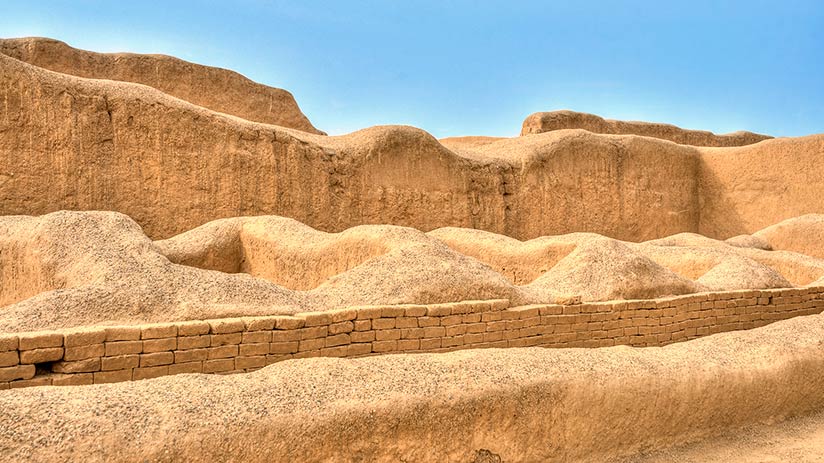 Chan Chan has even declared a World Heritage Site by UNESCO in 1986. It’s believed that this Unesco Cultural Heritage of Humanity contained over 10,000 buildings at its peak and was home to an estimated 30,000 to 60,000 residents. Although Chan Chan is located on a desert strip of the Peruvian coast, it is believed that at the time there were numerous gardens due to advanced irrigation systems. 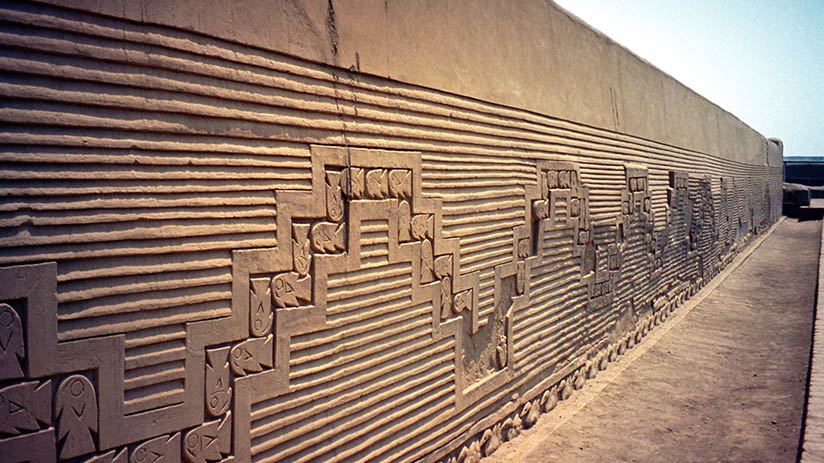 The city of Chan Chan was the ancient capital of the Chimú kingdom. The city during its prime occupied territory of more than 20 square kilometers. Chan Chan was built within the twelfth and thirteenth centuries of the Christian era. The entire city was made up of numerous streets, walls, buildings, pyramid temples, and other palaces. The different structures shaped the different “neighborhoods”, but the city center was mainly made up of ten walled “citadels” or “palaces”. The entire civilization of the Chimúes was quite advanced for their time, but with the arrival of the Incas, they fell into oblivion. This constitutes one of the most important facts about Peru.

An encounter with the Incas

It was in 1470 when Tupac Yupanqui completely besieged the city of mud. They left civilization completely cut off. They destroyed the tunnels that administered water to the entire city. But in the same way, the majority of the population chose to continue inhabiting the area. The population is believed to have shrunk to a mere 10,000 inhabitants. Some thirty years later, the Chimú decided to rise against the Incas, but their effort was in vain. Huayna Capac together with his army looted and burned what was left of the city. After this, it was practically in ruins. The rebellion was one of the endpoints of the Chimú culture.

With the arrival of the Spanish, the city was completely looted, losing numerous valuables such as gems, gold, silver, and much more. It is a must-see for those seeking to learn about the ancient history of America.

About the Chimu kingdom

The Chimú kingdom was one of the civilizations that reached its peak during the 15th century. But just during the height of the Chimú culture, it was when it fell into the hands of the Inca Empire. The capital of this civilization was known as Chan Chan and was located in the river valley of Moche. It was a citadel built entirely with adobe. It was the largest land city in Pre-Columbian America. The different vestiges and remains reflect in its construction a clear and strict political and social strategy. This is emphasized by its division into nine palaces or citadels that form independent units.

The Chimú kingdom ruled from Chan Chan and for two centuries it was the main state of this part of the country and one of the most famous places in Peru these times. It stretched roughly from Piura in the north to Paramonga in the south. The economy of the empire was based on agriculture. It seems that the kingdom had elaborated a hierarchical system of social classes. The artisans produced fine fabrics and objects of gold, silver, and copper. In addition, there were numerous ceramic works produced with standardized designs and in molds.

The Chimú spoke Yunca (Yunga or Moche), a now-extinct language. The Moche civilization spoke a similar language. As it does not have an explicit writing system, it is not possible to know exactly what this language was like. Between 1465 and 1470 was when they fell under Inca rule, convinced that Inca weapons were invincible. Most Chimú historical and mythological traditions were recorded by Spanish writers after the conquest.

The true treasure in the Chan Chan archaeological zone lives in how it was planned hierarchically. Since the remains of industrial, agricultural, and fluvial systems are included. The great monumental area in the center of the city was previously larger.

The architecture of the city

As for the architecture of the Chan Chan archaeological zone, we can say that most of the complex is protected by high walls. Some of them reach a height of up to 15 meters (50 feet) and have single access, thus facilitating the control of who entered and exited. The citadels had some rectangular fenced areas and are divided into three major sectors.

The northern sector, which is usually a plaza that led to certain warehouses or audiences. The Central sector, where most of the buildings are located in the complex, and the South sector where vestiges of kitchens and bedrooms were found. Even the walls surrounding the palaces had beautiful reliefs with geometric and zoomorphic designs. The way it was built is the reason why Chan Chan can be considered one of the most amazing archaeological treasures in Peru.

The highest-ranking rulers and nobles settled in the center of the city. Precisely in a few palaces or small citadels limited by high walls. It seems that each complex belonged to a ruler with his seat of government. And around these 9 citadels, there are about thirty enclosures with very great similarities to that of the palaces. These had their water wells, patios, and reservoirs. It is believed that the lower-ranking nobles lived in these surrounding spaces.

A hierarchy represented in its spaces

The large and wide courtyards were bordered by decorated walls made of adobe. These were the main settings for various celebrations, rituals, and activities. During a guided tour through the different palaces, you will be able to observe ancestral scenery where beautiful tiles with high-relief decorations cover the murals.

On the different walls, you will be able to see large representations of fish both on the left and on the right. This could be interpreted as the two currents that distinguish the Peruvian coast. Both the Humboldt current in the south and the El Niño current that comes from the north. You can also see wave designs, fishing nets, and pelicans.

After the looting carried out by the Spanish during their conquests, not much of the great Chimú culture remained. Even much of the old and true city has already disappeared. It is believed that previously this beautiful city occupied much more space than today. This is not to mention that there is no real guarantee that the few adobe buildings will remain standing for much longer. Increasing climate change and the El Niño weather phenomenon endanger this marvelous architectural work of the ancient world.

The torrential rains and possible floods that El Niño brings are a constant danger. In addition, the strong saline winds from the Pacific Ocean damage structures that are only composed of land. Continual erosion continues to jeopardize these construction marvels. Therefore, Chan Chan has to be among your list of the best things to do In Peru, paying your ticket entrance contributes to its conservation face to these natural threats.

Legacy of the Chimu

Although this civilization has been forgotten, the legacy of the Chimú culture remained in Peru. And it is suspected that despite the continued erosion of the mud city, there is still much to discover. In fact, during October 2018 some experts working in the Chan Chan archaeological zone found some interesting findings. In the area, 19 idols carved in wood that had a ceramic mask were found. These idols are believed to have the function of protecting an area of ​​the wonderful mud city. There is no doubt that the incredible architecture and its great secrets attract thousands of local and foreign tourists. The importance of this wonderful place is so great that UNESCO named it a World Heritage Site in 1986.

The best way to get to Chan Chan

If you are in Lima, you can get to Trujillo on a short trip by plane, bus, or private car. From Lima to Trujillo, there are about 560 kilometers or 350 miles. Depending on your available time you can enjoy the landscapes by bus or simply save time and take a flight. When you arrive in Trujillo, you can tour the city or start your adventure to Chan Chan immediately. To get to the city of adobe, you can take a bus to Huanchaco or take a taxi that will drop you off at the site entrance. From Trujillo to the city, it is a very short trip, so the taxi can be very accessible. Depending on your Peru itinerary, you can tour the citadel with a tourism agency or operator, who usually offers these journeys all the time.

Entrance and hours to visit 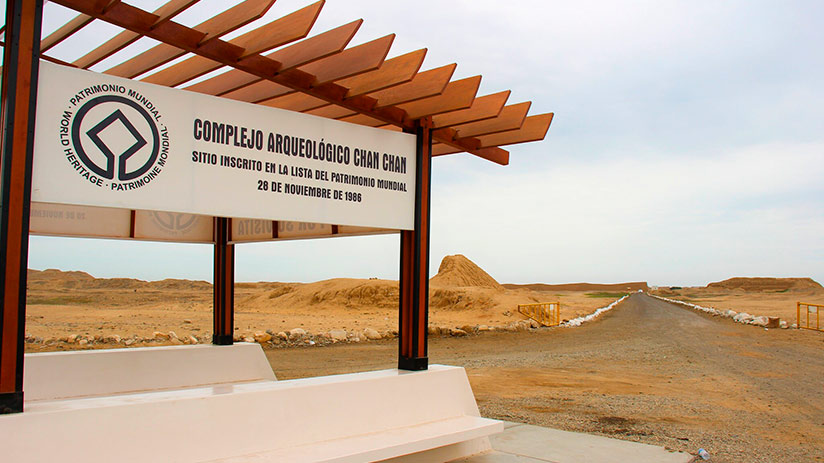 The entrance to the Chan Chan archaeological zone costs approximately 11 Peruvian soles. While a qualified guide can cost between an additional 30 to 35 Peruvian soles. It is very important to tour the site with a guide, as the ruins become more significant if the history is known. The Chan Chan entrance fee also grants you access to the museum and the Temple of the Sun and the Moon in Trujillo. It is in the temple where the largest adobe pyramid in Peru is located, also built by the Moche civilization. So the entrance is worth every penny, and you will be able to learn much more about the civilizations that inhabited the area.

We hope that this information has been useful to you when it comes to knowing a little about the Chan Chan archaeological zone. But we believe that the best way to enjoy this amazing archaeological complex is with a guided tour. A tour of the area can enlighten you on the different cultures that inhabited the area. Since the Incas were not the only ones who lived in Peru. We expect together with Machu Travel Peru to have been able to clarify all aspects regarding the wonderful city of mud. If you plan to enjoy this incredible attraction, you can take advantage of other nearby destinations. You can consult with our team of advisers to provide you with the best travel plan for you. Do not miss the wonderful opportunity to enjoy the Andean country.