If you like history and ancient sites, the city of Cusco in Peru is the perfect place for you. Cusco has a long and colorful history with many civilizations living in the area before the arrival of the Incas. However, what most interests people are the Inca archaeological sites around Cusco. To put ourselves in perspective a bit, it is necessary to turn the clock back to the 12th century. During this period there was the First Inca king known as Manco Capac. He was, according to legend, ordered by the Sun God Inti to find the best place to sink his golden rod into the ground until it disappeared. So he found the area where he founded Cusco, the navel of the earth. The main expansion of the Inca empires was in the last hundred years before the arrival of the Spanish. The ninth Inca Pachacutec was responsible for many of the archaeological sites that you can visit today such as Qorikancha and Ollantaytambo. And together with the travel experts of Machu Travel Peru, we have proposed a small article where you will know the most important archaeological sites of Cusco. Join us to know the wonderful sites that surround the Imperial City!

Some of the most important archaeological sites of Cusco 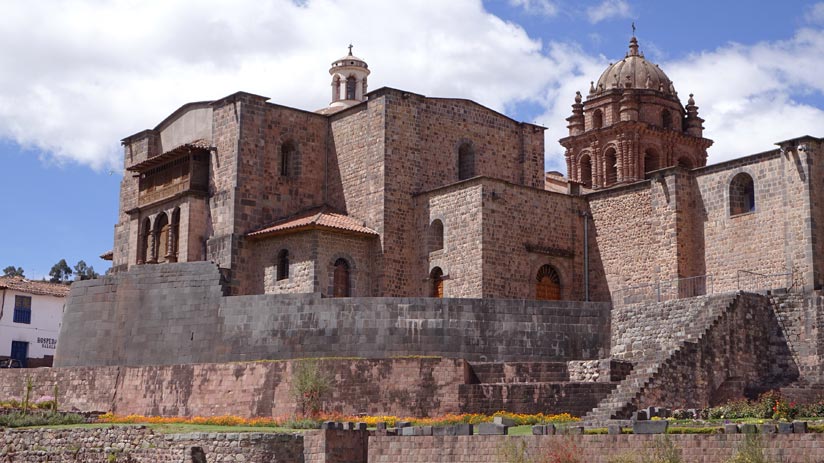 In Inca times, the Coricancha was the most important temple of the Inca Empire. Most of the temple was completely covered in gold. The interior walls were covered with gold leaf and there were also numerous replicas of objects in its courtyard. Among the replicas, you could find corn, altars, llamas, and life-size babies in gold and silver, in addition to having a replica of the Sun. The Spanish took a few months to melt all this and send all the gold to Spain. After the conquest, Francisco Pizarro gave the site to his brother, Juan, who after his death left it to the Dominicans who built the church of Santo Domingo. Today visitors can appreciate the Inca foundations along with the beautiful Spanish church built on top. The church is an impressive example of Spanish architecture and you should take the time to explore the impressive art collections. Take the time to see the many other ancient churches in Cusco as part of your Cusco city tour. Being able to know this site is, without a doubt, one of the best things to do in Cusco.

In Hatunrumiyoc, a narrow alley that runs alongside the Cathedral, you will find impressive examples of Inca Walls. These feature Spanish colonial buildings built on Inca foundations. However, one of the main points of interest is the stone of the twelve angles. You’ll know you’re close when you see the crowd of tourists gathered. This is the only known stone of this type. Despite not being an archaeological site in itself, it is great evidence of the mastery that the Incas had when building. Within the different tours in Peru, you will have the opportunity to know this as other important attractions. 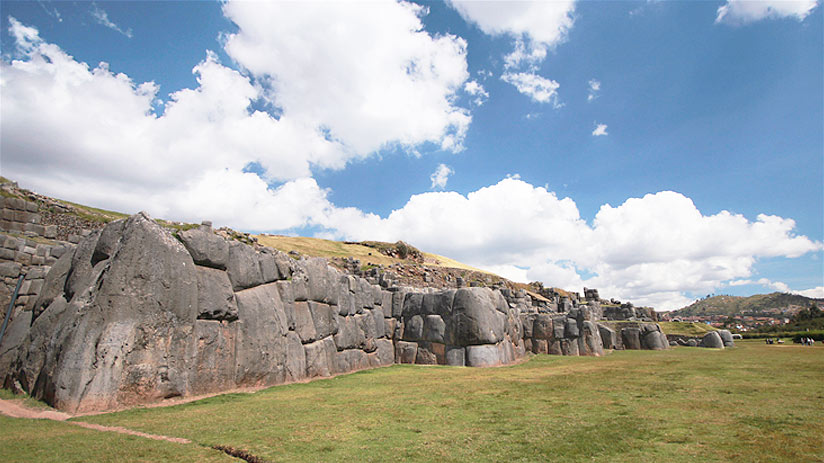 There are four archaeological sites close to Cusco that are a must on every Cusco tour. The first and closest to Cusco is Sacsayhuaman. In 1536, the fortress was the scene of one of the bitterest battles of the Spanish conquest. More than two years after the entry of the Spanish into Cusco, Manco Inca recovered the fortress of Sacsayhuaman. He used it as a base to besiege the conquerors in Cusco. Sacsayhuaman had a religious and military significance since it was the guard post over Cusco.

The name Sacsayhuaman can be translated from Quechua to “place where the falcon is satiated.” The name is surely due to the presence of these birds. What you see today is only 20 percent of the original structure. Shortly after the arrival of the Spanish, they broke down many of the walls to build their own houses. But luckily they left the biggest and most important stones for us to enjoy today. Today it is also the headquarters of one of the most important festivals in Cusco, known as the Inti Raymi.

Right next to Sacsaywaman are the fascinating Qenqo ruins. The name Qenqo also comes from the Quechua language and means “zigzag” or “labyrinth”. The ruin is an interesting mix of niches, steps, and extraordinary symbolic carvings, including the zigzag canals that gave this site its name.

This is believed to be a sanctuary dedicated to the cult of animals. Qenqo is made up of ruins formed by rocky sites with jagged steps. You can also find the main building that resembles an amphitheater. It is located on the road to Sacsayhuaman just 4 kilometers from the Plaza de Armas and the Cusco Cathedral. 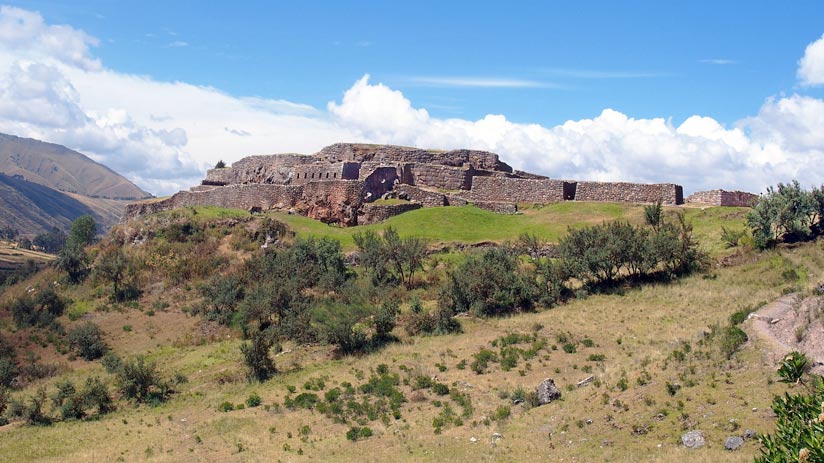 Due to its proximity to Tambomachay, it is believed to be related to its defenses and the control of the route to Calca leading to Antisuyo (Inca Forest). It is a fortification made up of platforms, stairs, passages, towers, railings, and a wall to protect the entire building in a circular shape. The site is located just 7 km from the Cusco main square. 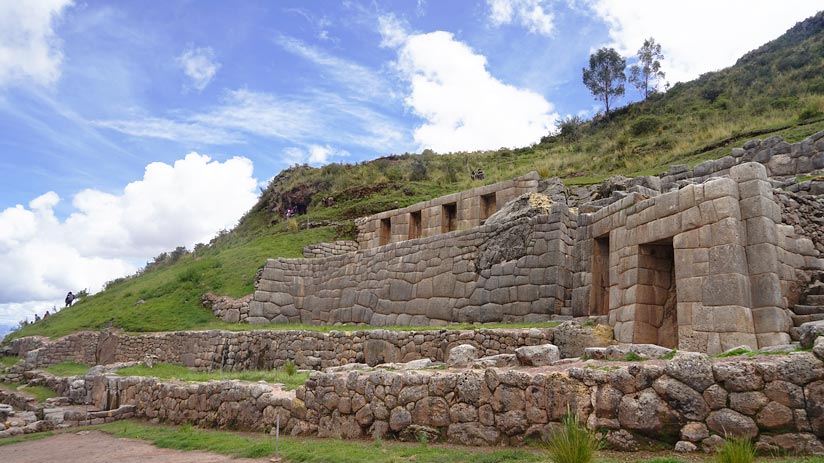 Finally, there is Tambomachay. This archaeological site consisted of Inca ceremonial stone baths. These channeled the spring water through sources that are still in operation. Some theories suggest that the site was used as a place of worship for water or a site where the nobility bathed in ceremonies.

This was a place reserved for the Incas of the higher social class. It is called “Baños del Inca” (The hot spring of the Incas). In its construction, you can see stonework with precise finishes that show the incredible mastery of hydraulic engineering. It mainly consists of a set of walls connected by stairs.

South of the city of Cusco, there are even more fascinating ruins to discover. Approximately 30 minutes by car from the city is Tipón. Tipón is another important Inca archaeological site that can be found 23 kilometers (14 miles) southeast of Cusco.

It is mainly an agricultural area, with megalithic buildings and an amazing citadel. There is also a large group of large agricultural terraces. As you scale the Andean landscape, its size will decrease. A great wall covers all the contours of the area. In which in its center there is a set of constructions made of megaliths. And in the center, you can find the remains of an ancient citadel. It is believed that a large population of Incas existed here.

This is an Inca archaeological site located 38 km (23.6 miles) southeast of Cusco. Piquillacta is made up of the remains of a city that once occupied an area of 50 hectares. Inside you can see large constructions, some with two floors, embankments, large walls that reach up to 7 meters in height, and aqueducts among other things.

This is a site where one can visualize the scope achieved by the Inca in its architecture and urban organization. Some historians believe that this site had a military purpose as a supply center due to the large deposits of agricultural products, tools, clothing, and weapons that have been found.

Not far from Piquillacta is Rumicolca, the huge Inca Gate that was built on the foundations of a Wari temple. Rumicolca is an Inca archaeological site, located about 39 kilometers (24.2 miles) southeast of Cusco and 1 km (0.62 miles) from Piquillacta. This is the main entrance to Cusco on the way to Collasuyo (the southern province in Tahuantinsuyo).

This place had the functions of a customs post. The huge and majestic portal is built of carved stone, surrounded by high walls, and water channels flow through the lower vertex. There is also a large aqueduct used as a water supply for the population of Piquillacta. After visiting the different museums in Cusco, make sure you get to know this wonderful place.

Tourism in Cusco is growing every year and among the must-sees in the area are the archaeological sites around the city. The city is full of interesting ancient sites to visit. Every day at Plaza Regocijo there is a free walking tour in Cusco that will take you to all the wonderful places in the Imperial City. This service is offered in both English and Spanish and the guides are very informative.

Or you can also decide to book a private city tour with one of the many agencies located around Cusco. The tour will take you to Qorikancha, the Cathedral and the ruins above Cusco. If you were wondering if Cusco is safe to travel, your answer is yes. The wonderful Imperial City is a highly touristy place, so security measures are constantly being taken. Cusco is unlike anything you can experience anywhere else in the world, so book your tour of this wonderful ancient Inca city today.

“EVIDENCE DOESN’T LIE. HISTORY MAY BE ACCURATE, BUT ARCHAEOLOGY IS PRECISE.”