Cusco, the most touristic city in Peru, can be visited at any time during the year. But during the months of May and June, visitors can see the greatness and richness of its culture and costumes. Most of the celebrations and festivals have a catholic theme and some others themes as well are presented, so people can appreciate, ancestral traditions, dances and rituals. In this guide MACHU TRAVEL PERU will let you know when and how are celebrated each of these festivities; so, if you are planning to visit Peru this information will be very useful to plan a vacation full of culture, music, color and traditions.

During the month of May there are some celebrations that take place in the city of Cusco. Cruz Velacuy is one of them and it is celebrated every May the 3rd, this date is considered as the start of all the celebrations that take place in the city. This traditional festivity started in the 18th century and generally it was a small familiar celebration that people offered to the “Crosses” that are located in many parts around the city. The celebration by itself start the previous night with the traditional “velada de la cruz”, there is a person that is in charge of preparing all the arrangements; its name is the “carguyoq” and generally this person offers the house and an altar that is built in honor to the cross. 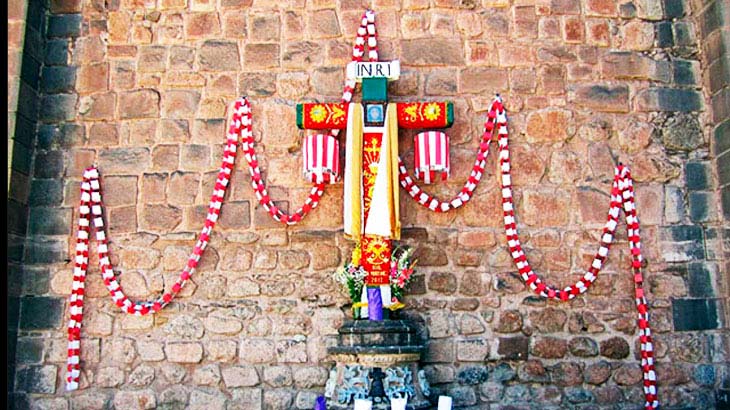 The traditional festivity of Corpus Christy, which is celebrated either in May or June and this year 2016 it will be celebrated the 26th of May as its main day. This religious celebration that is celebrated all over the word has a particular, colorful and traditional background that started when the Spaniards arrived to Cusco. Noticing that the Incas celebrated a parade in which they took their mummies (that were considered deities) around their main square, they decide to end that tradition up and as a way to impose the catholic religion and they changed their mummies with the images of catholic saints.  Since that time the different churches of Cusco in this particular date prepare their saints with colorful and beautiful clothes specially sewed for the parade. Also many traditional dances can be seen in the 3 days that this festivity is celebrated. 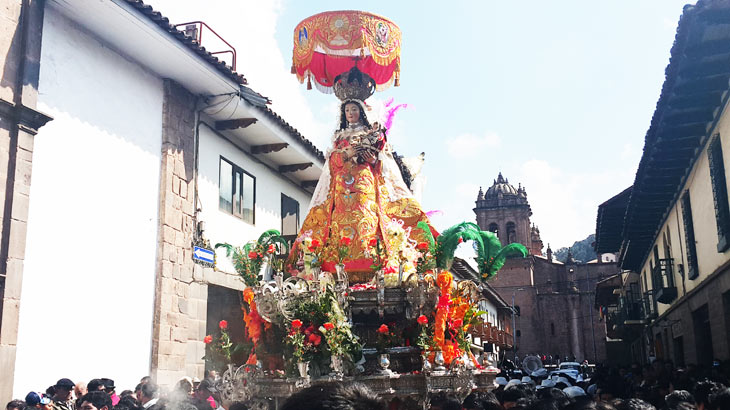 One of the most delicious and typical dishes can be also seen and tasted in this festivity, its name is Chiriuchu that means cold food served dish. This traditional dish is eaten cold; it has many ingredients such as hen, guinea pig, sausage, corn, rocoto chili peppers, cheese, dried meat, cochayuyu and it origin goes back to the Inca time when people who came to the city to celebrate the festivity of Corpus, brought this ingredients from their homes and they mixed them all in a dish. The tradition says that to enjoy this dish you have to eat a little bit of all the ingredients at a time. 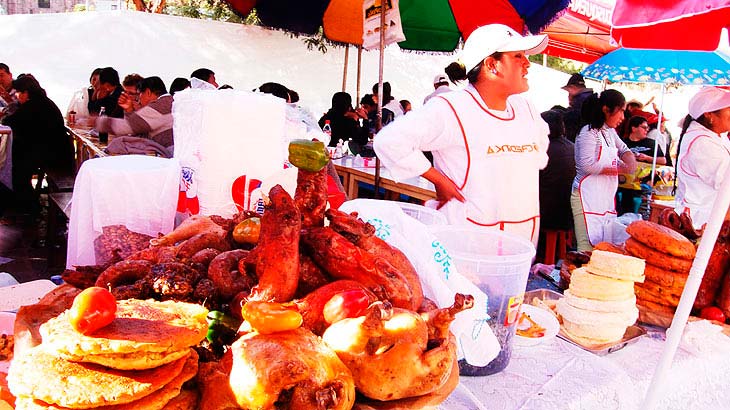 There are several parades during the month of June and this is due to Cusco’s day celebration. Many of the institutions such as schools, universities, public and private institutions, hotels, tourist agencies and many more prepare typical dances in order to be presented in the parades that take place in the main square or Plaza de Armas during the previous days to Cusco’s day. School’s parade is a contest and boys and girls of the last grade of primary and high school, give their best at the moment of dancing to win. Universities, institutes and other institutions do the same in established days but it is a spectacle that you have to see. 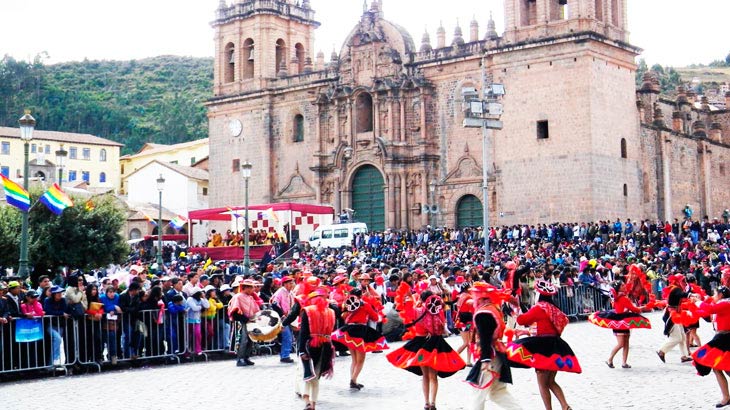 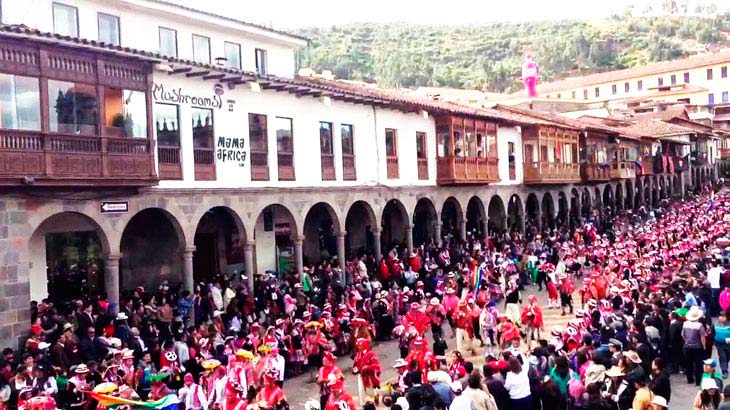 The art and creativity also take place in the parade of the Bellas Artes Superior School of Art that takes place also in the main square of the city and where the creativity and art are part of a peculiar way of expression. A parade full of color and music that will make you dance and enjoy while you watch at it. 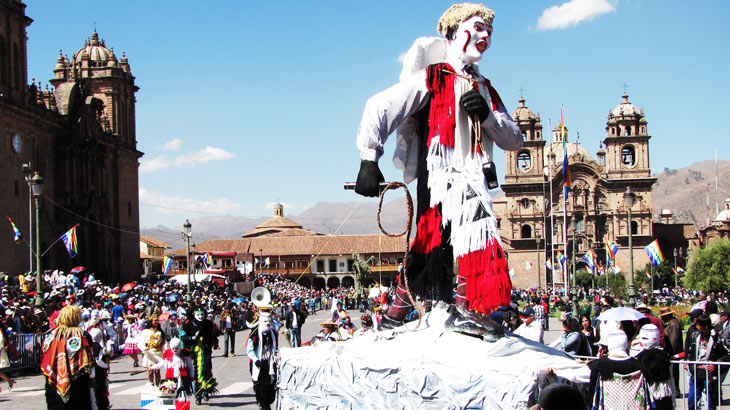 Fireworks and a great night of music in Plaza de Armas is a celebration in honor to the Inca city of Cusco. All the people are invited to a night of light, sound and music in the main square where you can enjoy some varied music from different groups and spectacle of fireworks that will light up the cusquenian sky. 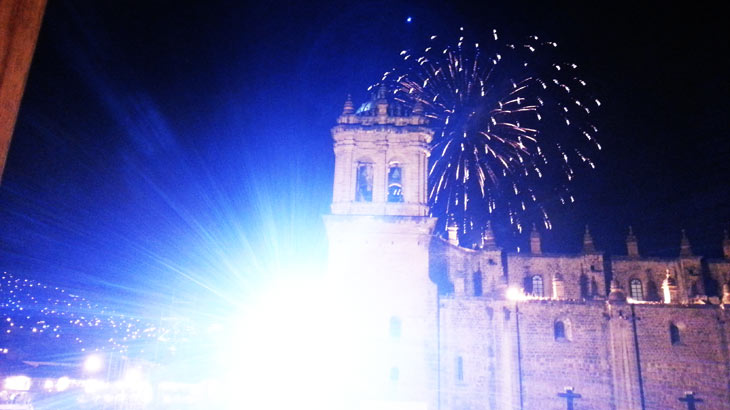 The 24th of June is Cusco’s anniversary day and it also takes place the great celebration of the Inti Raimy which is considered as the most important celebration in honor to the Incas main god: the Sun. In our next blog article you will find all the information of this great festivity, where it takes place, what is the meaning of it and the full program that includes the different parts of the celebration.