The renowned Nazca lines are a group of hundreds of indecipherable geoglyphs engraved in the middle of the Peruvian desert. The different lines and figures have been the subject of debate among archaeologists and scientists for years, giving rise to numerous theories. Some of these theories are more accepted by scientists, while others delve into impossible-to-test theoretical scenarios. The responsible civilizations made the images throughout hundreds of years dating back to 200 B.C. Some groups of scholars suggest that these were done by two different groups and in separate periods. The different Nazca lines images vary greatly in size, shape, and complexity of the figures. But among all the different lines, geometric images, and zoomorphic figures, the latter are the ones that attract the most attention. Therefore, together with the experts at Machu Travel Peru, we would like to tell you a little about the best Nazca lines images.

The most important Nazca lines images to appreciate 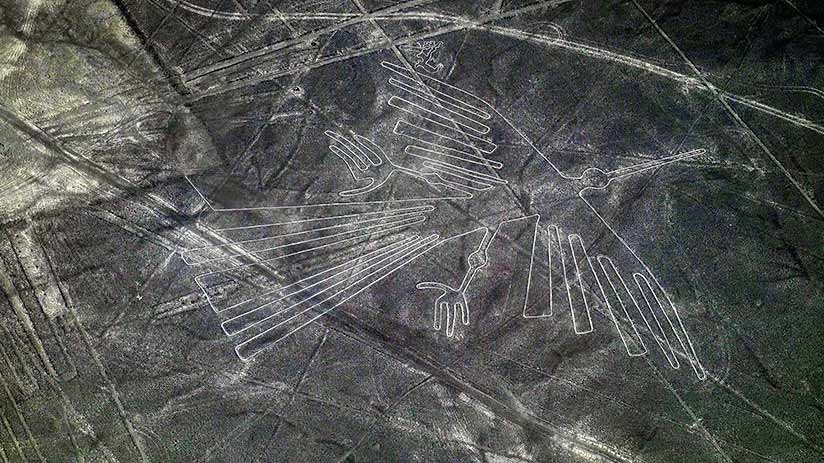 The condor geoglyph is one of the most famous and recognizable Nazca lines images. But lately, some expert groups suggest that this figure looks much more like that of a chaucato (a long-tailed nightingale). Precisely this bird tends to hover very close to the lines, making this theory probable. While the Andean condors can be seen more than 100 miles from the area. Although it would not be surprising to see the representation of an animal foreign to the area. Since as can be seen in other Nazca Lines images, there are geoglyphs of animals characteristic of other areas and zones.

Similarly, the condor geoglyph is one of the largest and most surprising, reaching 130 meters long and 115 meters wide. The images and words do not do justice to these ancient wonders, so we recommend that you see them with your own eyes. Being in front of them, you will begin to wonder how were the Nazca lines made. 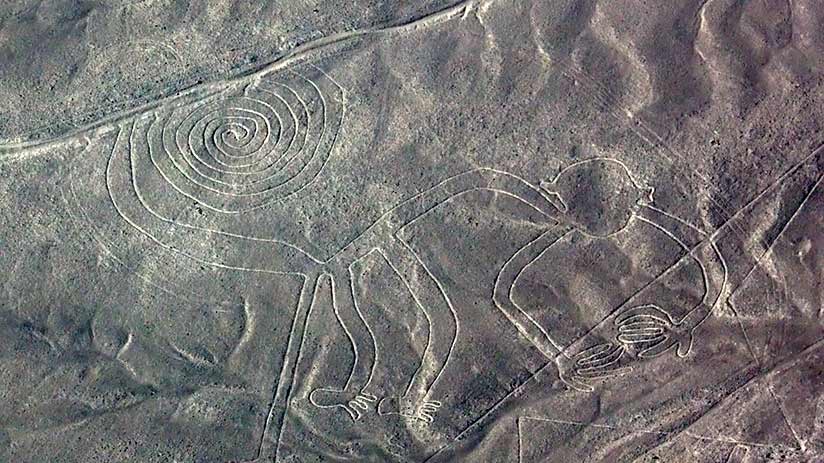 Among the different geoglyphs, the monkey is one of the most iconic, emblematic, and fun Nazca lines images. This monkey geoglyph is represented with only nine fingers and a spiral-shaped tail. Another of the representations of foreign fauna. It is a remarkable geoglyph since it represents an animal not very characteristic of the Nazca desert region. Although monkeys are clear Peruvian inhabitants, they usually live in the jungle regions of Peru. And its presence in the desert may suggest some trade routes established during the rise of the Nazca culture. Its mere representation shows the great knowledge of the Nazca civilization. The Nazca Monkey is a large geoglyph, measuring about 330 feet long and about 190 feet high. Within a Nazca lines tour, you will be able to appreciate this figure along with many others, being able to contemplate the titanic task of this ancient civilization. 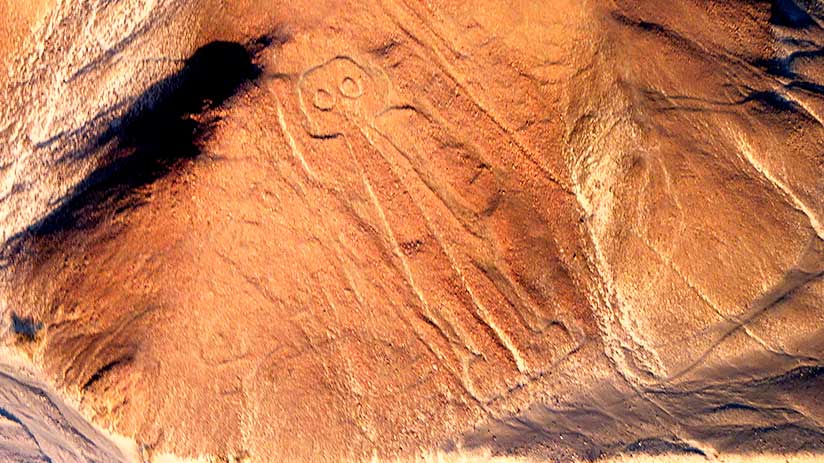 Almost all Nazca lines drawings are faithful representations of some key animals in the Nazca culture. But there are also some images or figures that are a mystery and the astronaut is one of these. This famous geoglyph causes numerous outlandish theories to emerge to give meaning to the Nazca Lines. Nicknamed the astronaut, the giant, or the owl-man, this geoglyph leaves many puzzled. This humanoid figure remains an enigma for many academics.

But this image appears to be the figure of a human being with large eyes. Although some argue that it may be a type of fisherman due to the proximity of the coast. Some even argue that the figure can be seen holding a net in his left hand.

Researchers even believe that it is an image much older than the Nazca culture, belonging to the Paracas culture. If you want to better appreciate the image of the astronaut, you have to fly over Nazca lines. 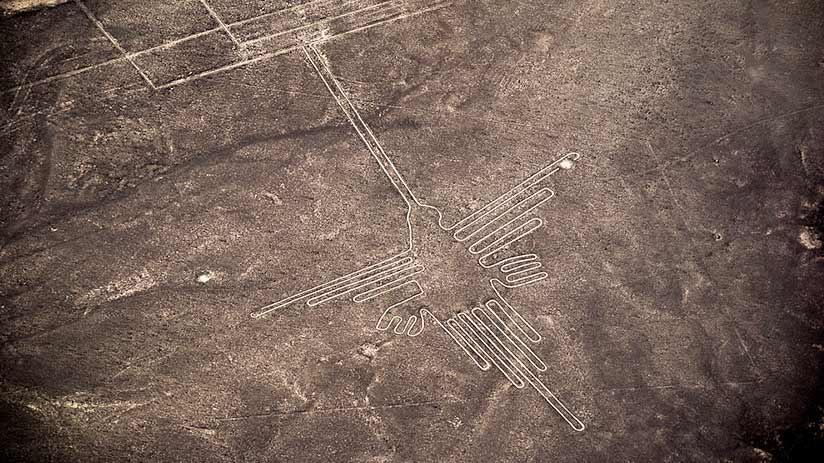 Undoubtedly, when one does the Nazca Lines tour, the hummingbird is one of the many animals that you will find represented in the Nazca Lines images. Peru is home to many species of hummingbirds, with more than 125 recognizable species. This figure that attracts so much attention has an excellent layout, so much so that you can spot it without difficulties in your flight over the lines. The Hummingbird in Nazca lines is one of the easiest geoglyphs to distinguish due to its well-defined wings alongside its long, pointed beak.  This incredible Nazca line image is an amazing 320 feet long and 216 feet wide. A giant representation for such a small animal if you think about it. 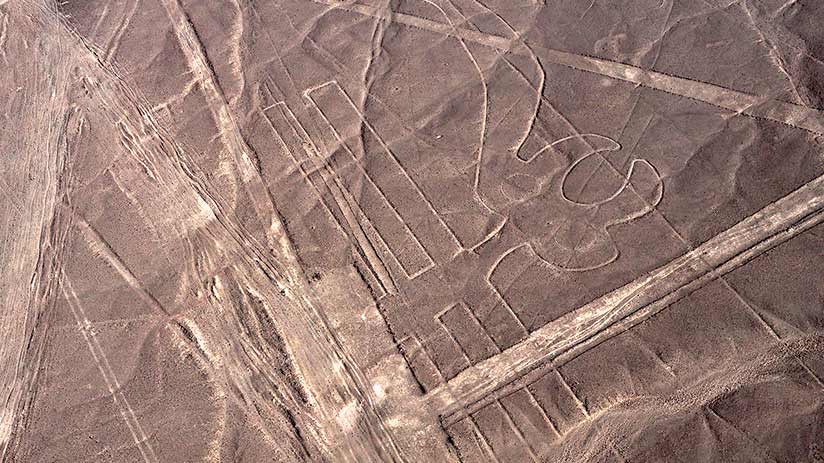 The Parrot is not so easy to spot, as there are hundreds of other lines traversing the area. But if you have a good eye, you will be able to at least make out its beak and head along with a large crest that protrudes from one side. Unfortunately, the lower part of this image has been altered due to continuous erosion and human manipulation. Despite this, you can still see its wings which are curiously represented by two parallel rectangular shapes. Besides, what can be seen of its representation and design is somewhat unnatural. Unleashing the imagination of numerous theorists and academics who are drawn to the site. These peculiar designs have shaped many Nazca lines theories. 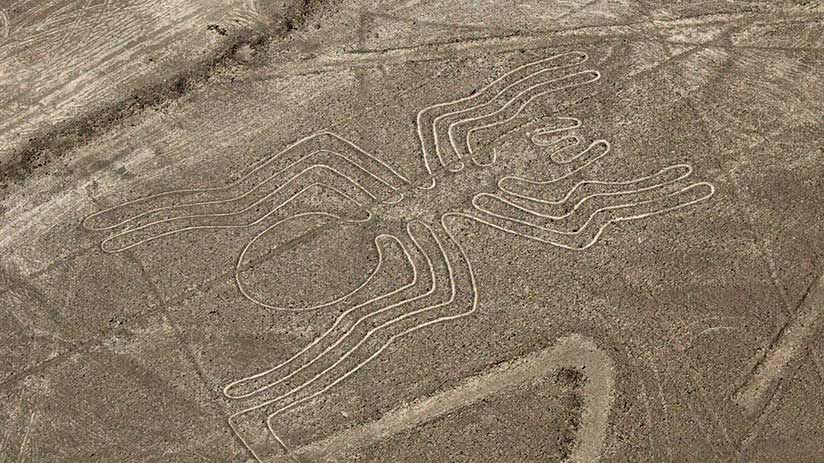 While all the Nazca lines drawings are amazing, the spider is one of the most distinguishable figures from the sky. This was one of the first geoglyphs sighted by Paul Kosok, one of the first scholars to study the lines. The Nazca spider is about 150 feet long and quite large, it is even very well defined making it very easy to find within the Nazca lines map. This figure is part of a network of lines located on the edge of a trapezoid. This renowned geoglyph has religious and astronomical aspects. The spider is an outstanding figure thanks to its characteristic line. Since the width of the drawn lines fluctuates between 210 centimeters in their widest areas. While in its less wide areas the lines reach about 40 centimeters. One of the best figures to appreciate on your next tour. 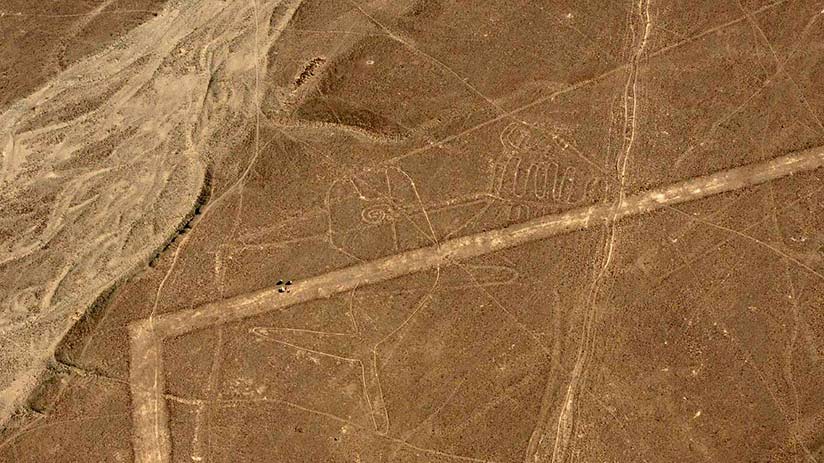 It is not surprising that this ancient culture decided to revere this majestic animal, being a culture very close to the coasts. Among the different Nazca lines pictures, the whale has a fairly simple but easily recognizable design. Nazca culture decided to symbolize a great variety of indigenous animals. Among them, the whale was fortunate to be represented on the desert canvas of Peru. In fact, there is a second whale geoglyph that resembles an Orca or Killer Whale. This has a much more complicated design and it’s really difficult to distinguish. And like other geoglyphs, whales are represented within the ceramics belonging to the Nazca civilization. The whales were also represented in some ceramics from the ancient Nazca civilization.

Believe it or not, the Nazca Lines images feature the not-so-known representation of a dog! That’s right, a geoglyph of a dog! The Nazca dog appears to be in a startled and alert state. In the representation, you can distinguish the upright posture of the dog. It stands with its legs straight, its straight tail, and both its mouth and ears are open. Although it may just be stretching. The dog geoglyph has dimensions that do not exceed 170 feet in length. It is believed that this representation refers to the characteristic Peruvian dog, known as the Peruvian Inca Orchid. It is one of the native races of Peru, where it does not have hair.

There are some Nazca Lines Images that are truly difficult to distinguish and discern. Especially when it comes to the Pelican, also known as Alcatraz. It was known as Alcatraz since this was an old Spanish word for the Pelican. Although this geoglyph is also known as flamenco, cormorant, or even a phoenix. Its representation is that of a winged body with a long neck in the shape of a zig-zag. The figure ends with a head and narrow spikes that can measure up to 935 feet long, one of the longest geoglyphs in all of Nazca. Being able to enjoy this geoglyph is one of the best things to do on the different tours in Peru.

“TRAVEL IS FATAL TO PREJUDICE, BIGOTRY, AND NARROW-MINDEDNESS.”

We hope together with the experts of Machu Travel Peru to have been of help for your next trip to the Nazca lines. Keep in mind that these are not all images, they are just some of the most recognizable. But from the air, you can get an idea of ​​the titanic work that ancient civilizations undertook. If you are looking to know more about our tours of the lines, do not hesitate to consult with our qualified advisors.