On a certain day at the beginning of the 20th century, an airplane was flying over the Peruvian desert, seeing the pale and opaque monotony of the rocks and sand. Then suddenly, the landscape took a different shape and was littered with lines and shapes of insight. The pilot couldn’t believe it, figures so big that only a giant could have made them. Since then, the discovery made Nazca one of the most visited places in Peru, and now, many tourists seek to experience a fun flight on these lines. However, much of its growing popularity lies in the mysterious purpose of the lines. Despite the great efforts of academics, today there are only approximate theories that try to explain the purpose of the Nazca lines. So today you can find many varied Nazca Lines theories. And together with the Machu Travel Peru team, we want to investigate some of them. Not without first recommending you include this wonderful destination in your itinerary.

Everything you need to know about the different Nazca Lines theories

What are Nazca lines

Nazca Lines are more than 300 giant biomorphic geoglyphs drawn many centuries ago in the middle of the Peruvian desert. These 70 animal and plant designs are found 200 miles south of Lima. They can only be seen flying over the area and represent a mystery for archeology today. This is why many Nazca lines theories were developed about their purpose.

Who discovered the Nazca lines?

The Peruvian archaeologist Toribio Mejia Xesspe was the discoverer of the Nazca lines in 1927. He had already worked in the place researching the unknown Nazca culture, together with another great Peruvian archaeologist, Julio C. Tello. The last one decided to continue its investigation to another Peru’s zones and Toribio stayed in the place investigating those giant lines on the side of the old Nazca capital that didn’t seem to lead to anywhere. One day, he decided to climb up a hill to have another perspective of the zone, discovering giant figures, he couldn’t believe what he is seeing. 3 years later, planes that overflying the place revealed photos of the mysterious figures.

If we talk about Nazca lines theories, first we’ll define the location. The Nazca lines are in Nazca, a desert province located in the northwest of the Ica department, 200 miles south of Lima. The zone is characterized by desert hills and hot and dry weather, with less than an inch or 20 minutes of rain per year. The absence of winds is the cause why the Nazca lines could stay unalterable for many centuries. In Summer, between January and March, the temperatures can get up to 95ºF. Instead, for the rest of the year, the average temperature is 68ºF.

How to get there

To get to Nazca lines, you have to take transportation from Lima to Ica Department (the trip lasts 4 hours). In the Lima land terminal, there are many bus companies that offer the service, the cost is around 50 Soles per person.

Since Ica, you can hire a taxi from the main square to Nazca town (the trip lasts 2 hours and 35 minutes), the cost is around 20 Soles.

Once in Nazca town, first, you can enjoy some available museums located around the main square where you’ll learn more about the pre-Inca Nazca culture. Next, you can take another taxi to go to Maria Reiche airport (the trip lasts 20 min) to overfly the Nazca Lines. You’ll better book your flight in advance. Flying over the Nazca lines for around 1 hour and 30 minutes is the best way to appreciate these mysterious lines.

The pre-Inca culture of Nazca 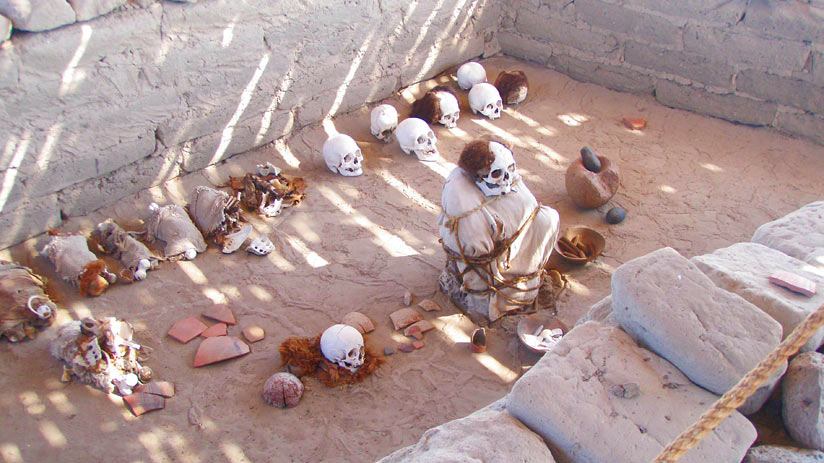 No wonder, Peru will be a real treasure box to many archaeologists around the world, even comparable to Egypt, India, or Thailand cases. Not only for the great Inca Empire vestiges but also for the pre-Incas cultures that developed before them like Chavin, Topará, Wari, Tiahuanaco, and Nazca cultures.

The Nazca pre-Inca Culture lived in the current province of Nazca. The people were located in little human settlements on the left bank of the Rio Grande (Big River) from the 1st century to around the 7th century. Their main activity was the intensive agriculture (They managed to irrigate the deserts of Nazca with aqueducts, advanced for the time) These ancient Peruvians showed advanced techniques in ceramic productions with polychrome iconography of animals, plants, and humans (many of them were mutilated) Regarding fabrics, these showed elaborated garments; examples of techniques inherited from the culture that preceded them, the Topará culture.

Its capital was Cahuachi (city of seers), an ancient city occupied by few persons (It’s believed that these were seers or priests of Nazca). But its main utility was a peregrine center where people from many parts of Nazca land (The territory reached the south of Chincha, north of Arequipa, and even the Sierra de Ayacucho) came. For this reason, one of the Nazca lines theories affirms that many of them travel to close areas of Cahuachi to draw the giant figures and pay tribute to their gods, for this reason, the Nazca lines represent animals that not are local inhabitants of Nazca territory, like the monkey, the Orca, or the hummingbird.

How were they made 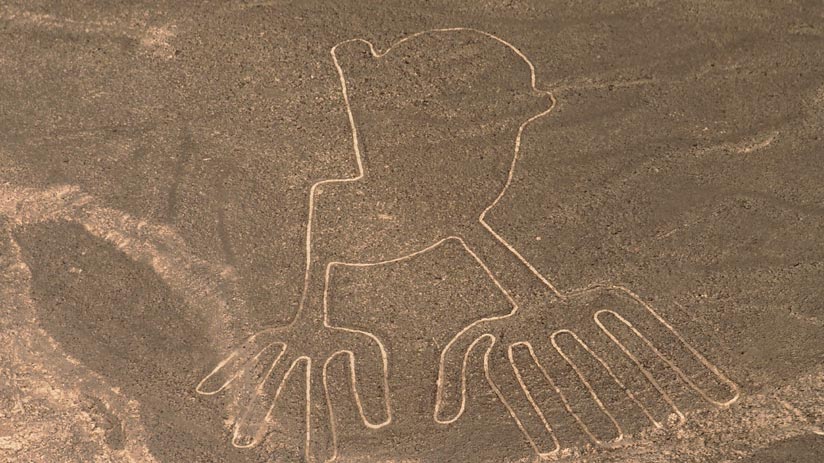 Again, before delving into the different Nazca Lines theories, it is a good idea to know how were the Nazca lines made. This series of geoglyphs are surprisingly accurate. It is suspected that due to the great precision of the lines, the authors used ropes and stakes in order not to deviate from the line. And we say “Authors” because it’s believed they were made by three different cultures at different periods. These cultures were pre-Inca, and among them was the Nazca culture. There were also the people of Topará (ancestor of them) and the Wari culture (after them). This is the principal answer to why the Nazca esplanade is similar to a big pane over which many drawings and doodles were made, one over the other.

The scientists believe that Nazca Lines were created more than 2000 years ago following the steps below. 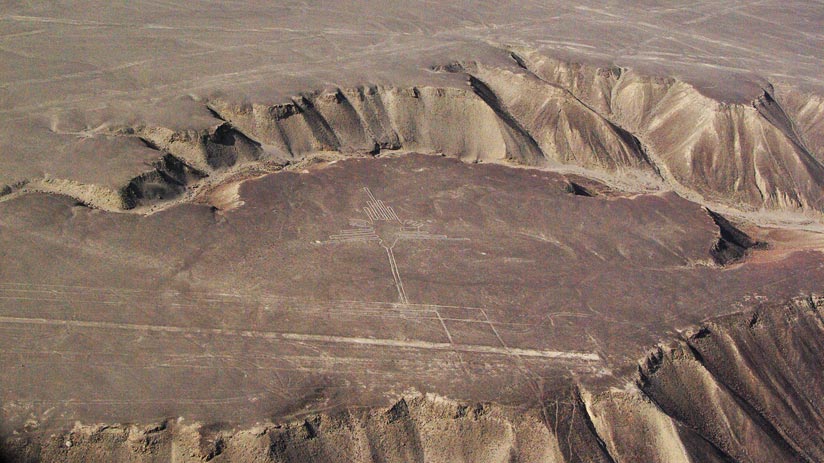 The purpose of the Nazca lines is still not entirely clear. Nobody knows why the different geoglyphs were drawn, but endless Nazca Lines theories have appeared to try to give meaning. Some of which are quite reasonable and credible, based on different studies. While others speculate about visitors from other planets. But, you draw your own conclusions.

Paul Kosok was one of the first persons to research the Nazca lines. This American anthropologist studied the lines from 1930 until 1949, by air and earth, leaving the legacy of his research to a young German woman named Maria Reiche. Paul Kosok affirmed that the Nazca lines were calendrical and astronomical signs according to his studies of the Sun’s location and the Winter solstice, calling the entire complex: “The largest scale calendar in the world”. Undoubtedly, Paul Kosok was an important influencer of this theory, being one of the first to promote the idea of ​​an astrological Nazca lines map. Its German disciple will explain best its conclusion along with hers years later. 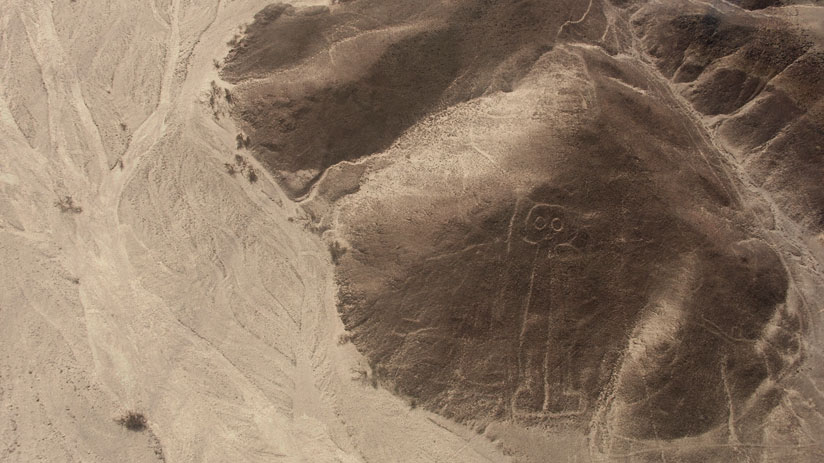 One of the first Nazca Lines theories to emerge around the site was that of a Swiss archaeologist. He was known as Erich von Daniken, and it was he who concluded that the drawings were made by aliens who used the lines as landing strips. In his 1968 book, “Chariots of the Gods,” he delved into this theory. No Place was one of the most infamous theories about the purpose and origin of lines.

To some, this may seem a bit crazy, but many people believed it. Being one of the first theories to gain popularity, it settled in the minds of fans of the site. He even managed to be more convincing with the presence of the “Astronaut” who is one of the many Nazca Lines images. But despite being a quite attractive theory, we can conclude that it does not resemble what the Nazca culture tried to leave as a legacy.

But among all the Nazca Lines theories, some are more credible than others. Especially the theory of the archaeologist Maria Reiche, a German woman who spent her life studying the geoglyphs for more than 40 years, being recognized by the Peruvian Government and UNESCO for his tireless research. According to Maria Reiche or “The Lady of the Lines”, the lines were a kind of astronomical observatory. Where the countless lines that crossed the desert were used to observe the movements of the Sun and the Moon. It is believed that the different geoglyphs formed a kind of map where to observe different celestial events. As well as predicting the change of seasons that helped them with their agriculture. Maria Reiche also believed that some shapes correlated with different constellations.

Today, among the most accepted Nazca Lines theories is the one originally suggested by American archaeologist Johan Reinhard. He claimed that the lines are related to some kind of ritual practice for the worship of water. Being the Nazca culture in a desert, it is not difficult to think of water as a precious and necessary commodity. Especially if one was looking for crops to grow. So the Hummingbird in Nazca Lines may have been one of the many sacred roads that led to ceremonial sites.

Archaeologist Donald Proulx and hydrogeologist Stephen Mabee raised one of the most credible Nazca Lines theories. They claimed that the lines pointed to different supplies and sources of groundwater. Also, this theory is reinforced with the so-called “Puquios” very close to the lines. These were sophisticated hydraulic systems built to recover water from the different underground aquifers.

Other Nazca Lines theories claim that the answer to the mystery of the Nazca lines is found in the pottery of the Nazca people. These masterpieces of ancient civilization were characterized by their bright colors. Different agricultural products were seen in the different ceramic examples, affirming a strong connection. Besides, all the drawings of the Nazca Lines were represented on the ceramics. This reinforces the theories that hint that the lines had a strong agricultural purpose. Nowadays, there are not many ways to see the Nazca Lines in the ceramics, but flying would definitely be the best option.

Today, no theory is accepted as fact in itself. But if it is concluded that the Nazca lines perhaps were multifunctional. Some areas could be related to agriculture, others to water, others to sky observation, and so on. But we believe that to draw your conclusions, it is a good idea that you enjoy a Nazca Lines tour. This way you can express your own conclusions. Who says you won’t be the next to formulate any of the next Nazca Lines theories?

“EXPERIENCE WITHOUT THEORY IS BLIND, BUT THEORY WITHOUT EXPERIENCE IS MERE INTELLECTUAL PLAY”

Being able to know the different Nazca Lines theories is quite motivating to start planning your trip. Especially if you plan to include this wonderful destination in your itinerary. Together with the Machu Travel Peru team, we hope we have been helpful. If you want to know more about any of our Peruvian destinations, you can check some other articles on the blog. And if you are looking to know about our different tours in Peru, you can consult with our qualified advisers. We will be waiting for your soon visit to the magical Andean country!