The Plaza de Armas in Lima is one of the oldest places in all of America, being the founding plaza of the city and the nucleus of urban life. It is a mandatory tourist spot for those who wish to visit the city since we are talking about one of the most significant spots there, surrounded by historical buildings and of great importance. Those who go on a guided tour of the city know that the Plaza Mayor is usually a great start within the historic center. It is located just steps from the most important points of the city, making it an ideal place to discover the historical and cultural side of this magical city. That is why together with Machu Travel Peru we want to explain a little about the buildings that surround the Plaza de Armas of Lima.

ABOUT THE PLAZA DE ARMAS

If you are planning a trip to Peru, you cannot miss one of the most iconic and historical places in the Andean country. It is one of the most outstanding and unmissable sites on a tour of the magical “Ciudad de Reyes”. The first foundation stone of the Plaza was laid on January 18, 1535, thus founding the colonial city of Lima, also known as the ancient capital of the Viceroyalty of Peru. After its foundation, Lima was taking a leading role within all of South America, is one of the oldest cities on the continent. Today the Plaza de Armas in Lima is one of the most recognized places by Lima and the place of choice to appreciate the best architecture available within Peru.

WHAT TO SEE IN THE PLAZA DE ARMAS IN LIMA? 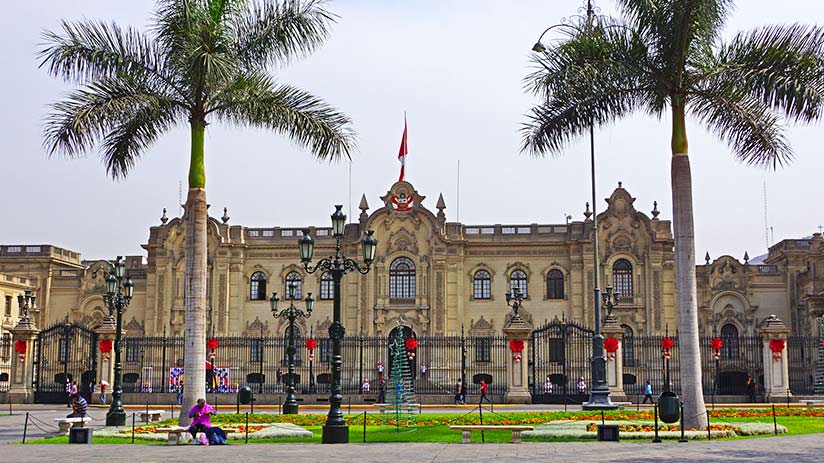 The Government Palace is one of the most spectacular buildings that surround the Plaza de Armas in Lima and it is also one of the most guarded. Soldiers in full uniform stand guard in front of the building, which is far behind the Iron Gates that protect it. Francisco Pizarro used to live inside, and he even lost his life in one of the first coup d’etats in Peru. Today, it is the home and house of the President of the country. It also serves as a place for numerous meetings and other government functions. Unfortunately, this building is not open to the public, but it is usually included as a visit in most of the Peru itinerary. 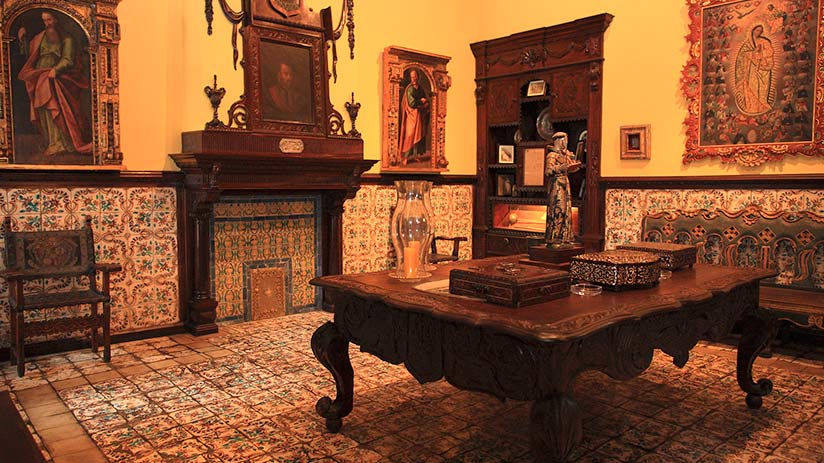 Adjacent to the Government Palace, Casa Aliaga is considered one of the best things to see in Lima. It is contemplated as the oldest house in all of the Americas. When the Spaniards founded the City of Kings in 1535, the Aliaga family was granted a parcel of land, who built this beautiful mansion that still stands to this day. It has undergone numerous renovations due to the damage that old earthquakes have caused, but it is still a great example of colonial architecture. It is located very close to the Plaza de Armas in Lima, making it a great attraction if you are nearby. 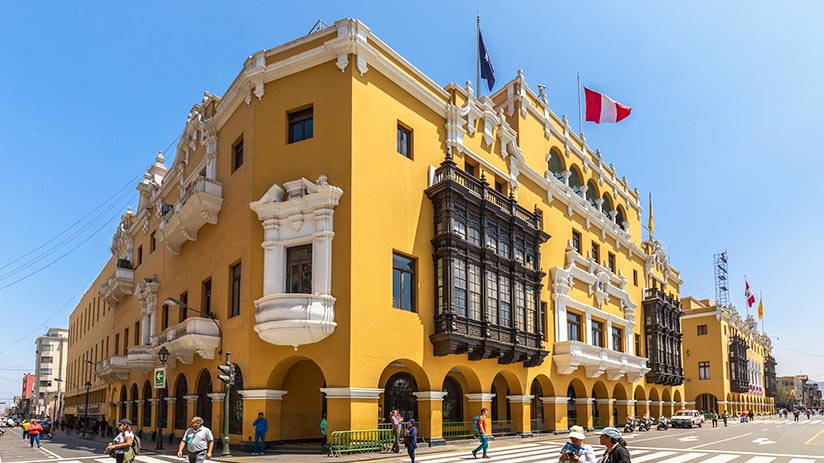 The Plaza de Armas of Lima is home to the Municipal Palace, a public building that serves as the headquarters of the government body known as the Metropolitan Municipality of Lima. The Municipal Palace is usually home to the most important politicians in Peru as well as the President. While you walk and take photos of the facades of the building, big decisions are being made inside. If you are on a tour in Lima, it is most likely that you can panoramically visit the place. 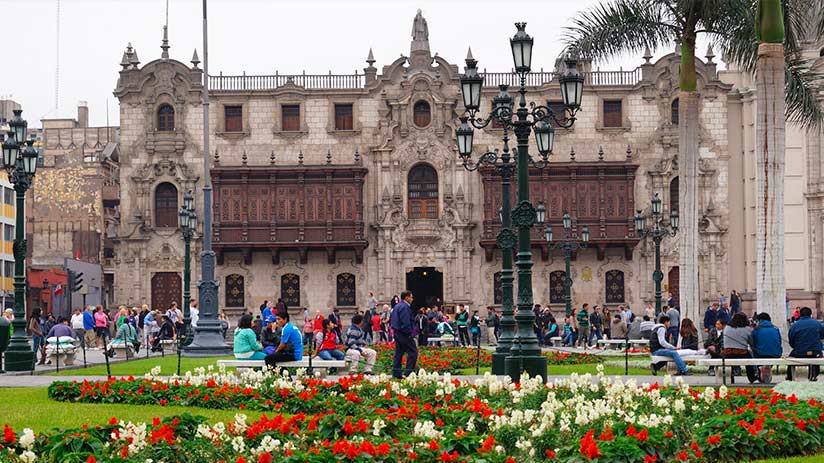 If you recognize a neo-colonial building with a carved wooden balcony, then you are looking at the Archbishop’s Palace. The palace is the headquarters of the archdiocese of Lima and is located near the Plaza de Armas in Lima. Its facade and architecture seem to go back to the origins of the city, but in reality, it is a construction built not long ago. In 1924, this palace was built right in the urban center of Lima, and today it serves as the home to the Archbishop of Lima. Besides, its doors are usually opened as a museum, so that you can enjoy a tour of its beautiful interiors. After a historical tour of the city, you will also find numerous other activities in the Peruvian capital, such as enjoying paragliding in Lima or other water sports. 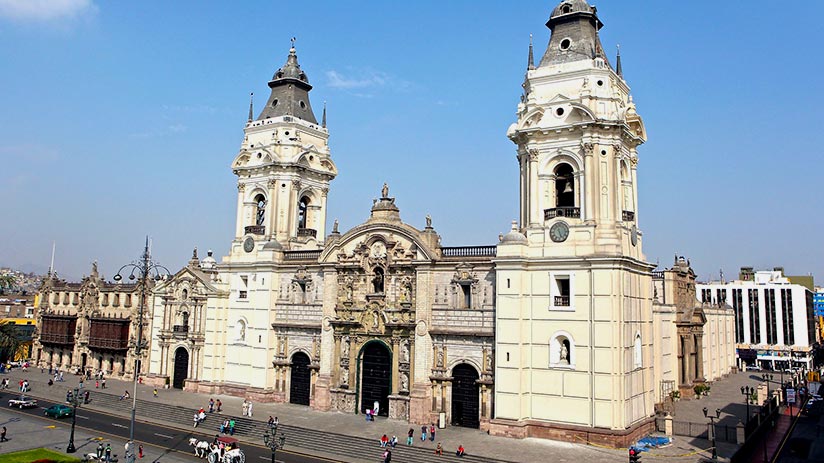 After touring the archaeological site of Huaca Pucllana Lima, you can start to see the buildings of great historical importance in the center of Lima. The Cathedral of Lima is usually one of the main buildings to visit on a guided tour of the City. This impressive building was built to transmit the power of the Church in the life of the colonists in the past. Inside, you can enjoy the cathedral museum that exhibits one of the best collections of religious art in the capital. Even Francisco Pizarro’s tomb is located inside the cathedral, therefore it is an unmissable visit within the magical city of Lima.

To conclude, we can mention the great historical importance of the Plaza Mayor within the Peruvian capital. Together with the travel experts from Machu Travel Peru, we agree that it is one of the most important places on a guided tour, to get to know a little about the historical side of the city. If you wish to consult our tours of the city, you can consult free of charge with our qualified advisers.

😎 Discover the #history of the cave paintings o

🤩 Do you already know this stone arch that take

🧍 Have you already done the #Salkantay trek to

🤩 If you are an art lover, you cannot miss this

🥳 If you plan to visit the #Ica area, this is y

🥳 Visit the Historic Center of #Lima, visit the

🌄 Do not wait more ❗️ Make the best vacatio

😎 Do you already know the historic city of the