What languages are spoken in Peru?

Are you thinking of traveling to the Inca Lands? There are many different aspects to consider for your trip to Peru. How do you get to Peru? How will you travel? Where will you stay? What type of accommodation is offered? What are you going to see? Is it safe to travel without an organized tour? These are all valid questions to ask when planning your trip not only in Peru but also in all parts of the world. However, in this article, the Machu Travel Peru team will talk about another equally important topic. So, what language is spoken in Peru? Join us to learn about the different dialects that are spoken in the country and to what extent.

But in addition to knowing the main language of Peru, we also want you to know some of the Andean and indigenous languages that are not so well known. Peru is a wonderful place that not only has a great diversity of landscapes, but also cultures and languages. For example, it is known that more than 150 indigenous languages were documented during the 16th century. This was during the process where the Jesuits settled in Peru. And many of these languages are now lost or mixed with some others. And with evangelization came mandatory teachings where it was sought to impose the Spanish language.

The different languages in Peru and their characteristics

WHAT IS THE MAIN LANGUAGE IN PERU? 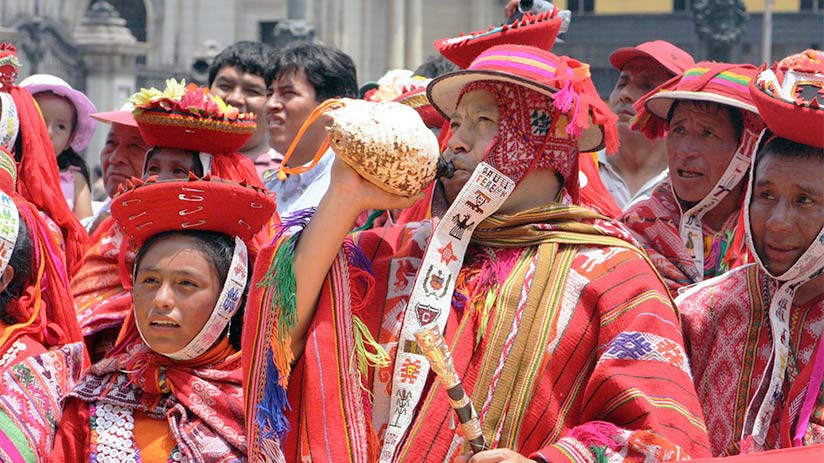 The main language in Peru is, of course, Spanish, spoken in all parts of Peru. Spanish is the official language of the country. Peruvian Spanish is mostly straightforward to understand if you have some knowledge of the Spanish language. Spanish in Peru is mainly divided into Coastal, Andean, and the Spanish from the Amazon in Peru. For example, Spanish in the Cusco region is influenced by some of the local dialects, spoken in that region of Peru. Therefore, you may hear different words than those typically spoken in Lima.

During the 2007 census in Peru, about four main languages were recorded. Even though there is knowledge of more than 70 indigenous languages and dialects. Although this number is also strongly disputed, as some linguists claim that the number ranges from 47 to 54 indigenous languages. And among the main languages, a significant 84% of Peruvians speak Spanish. This is the official national language. Despite this, 26% of the population also speaks a language other than Spanish. The second most widely spoken language is Quechua, with 13% of its population speaking it. Then Aymara follows with 2% of the population speaking the language.

ABOUT THE LANGUAGE IN PERU

It should be borne in mind that in the urban areas of the country, especially in the coastal region, people are monolingual. So in these regions, you will only find mostly Spanish speakers. This does not mean that there are no bilingual people in the coastal areas. While indigenous and native languages are spoken to a greater extent in rural and remote areas. The indigenous languages of Peru are spoken in the central Andes, the Amazon rainforest, on the southern border that borders Bolivia, and on the border with Ecuador. 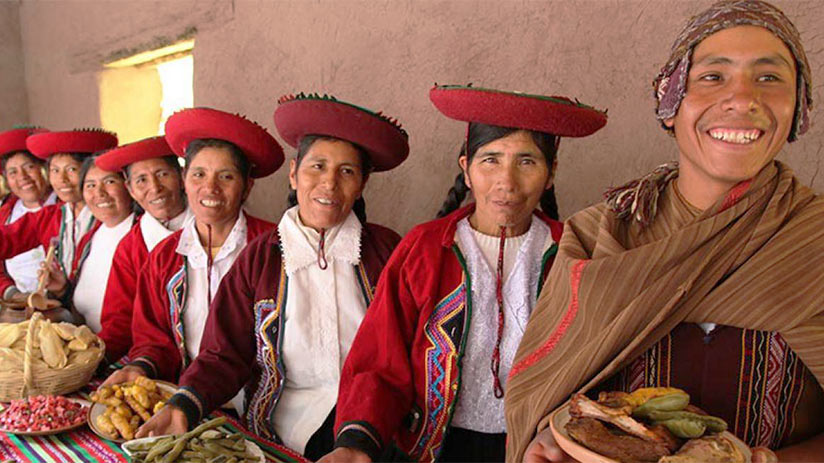 There is a lot of slang, which is only spoken in the Spanish language in Peru. Such as “Chibolo” or “Muchacho” for “Boy” or “Youngster” in English. Or you can refer to “Churro”, “Papasito” and “Guapo”, for good-looking in English. Peruvians tend to add the suffix “-Ito” on the end of a word as a term of affection. For example “Papi” becomes “Papito” which is the lingo that lovingly refers to your father. And “Mami” becomes “Mamita”, the term you would use for your dear mother.

The Inca word for mother earth Pachamama also appears in daily conversations in Peru. You may also hear the word “Pata“, which means someone from your group of friends, used primarily with the younger generation or a group of men talking about a coworker. If you have the time available within your Peru itinerary, it would be good if you meet locals to learn a bit of their lingo. 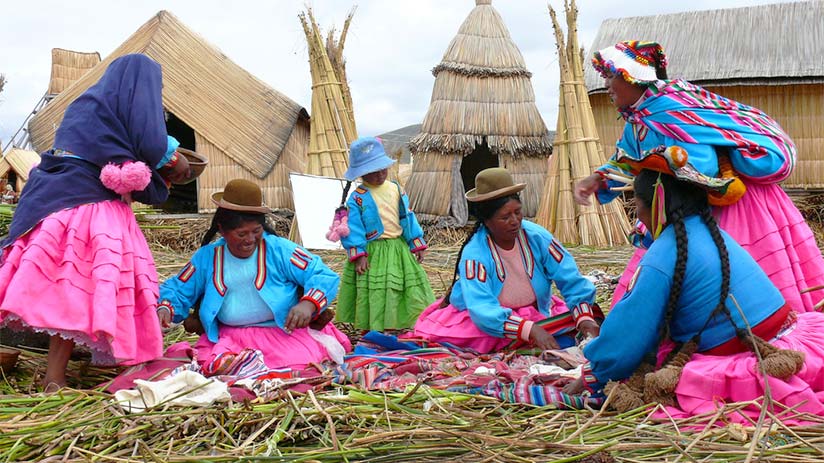 Recently, the Inca language of Quechua has received the status of the official language of Peru. The Quechua language was spoken by the Incas and is widely spoken in the Peruvian Andes. A spoken language like the Inca had no written language; Quechua is full of wonderful sounds but it is extremely difficult to speak. Quechua and Spanish are often mixed to form a fun mix of words that only local people understand. The language in Peru has survived for more than five hundred years. When the Spanish arrived, they tried to erase the language, but with perseverance, it remains today. Quechua is spoken by a third of the population of Peru and mainly in the mountains.

Quechua refers to both the name of the language in Peru and its entire linguistic family. This language is spoken both in the highlands of Peru and in other nations of the continent. Only in Peru, you can find more than 4 million speakers. It is, without a doubt, the most widely spoken and known native language in the country. It has even achieved the status of a national language, which is why, together with Spanish, it is another of the official languages. As is common knowledge, Quechua was the main language of the entire Inca Empire. And despite the Spanish invasion in the 16th century, the language survived the conquest. You could even say that it has evolved and changed a lot since Inca times. There are different variants of Quechua that are spoken in different regions of the country.

HISTORY ABOUT THE QUECHUA LANGUAGE

In big cities, there is usually a bit of discrimination concerning ancient traditions. With constant globalization where certain cultures overshadow others, the traditions of the country can be a bit outdated for the people of the big cities. This is why the Quechua language is not popular with people in the big cities, who seem to feel that the language is for the poor and uneducated. Former President Alejandro Toledo led a campaign to teach the language in schools. The project was successful as most schools teach some Quechua today. The former president delivered an inaugural speech in Quechua at the Inca Citadel of Machu Picchu until his wife, who was born in Belgium, delivered her speech in Quechua. In the different tours in Peru, you will surely have the opportunity to hear the locals communicate in Quechua.

If you want to learn a bit of Quechua, you are in the right place. Here are some basic words to learn.

There are many subdivisions and variants within the Quechua language family. So much so that some Quechua speakers find it difficult to communicate with people from different regions. A member of a Quechua community in northern Peru, for example, might have difficulty communicating with someone from Cusco, Puno, or the Lake Titicaca Islands.

THE AYMARA LANGUAGE IN PERU

Another common language in Peru is Aymara, which is used in southern Peru, mainly in the areas surrounding Puno and Lake Titicaca. This language is also strong in the north of Bolivia and the north of Chile, in all these areas there are around three million speakers of the language. Although it is a similar language to Quechua, Aymara has many differences. The main being the very distinct pronunciation. There have been many attempts to create a written language, but this has proven to be complicated, to say the least. Despite this, one of the best things to do in Peru is to listen to some Aymara speakers.

Aymara is another of the important native languages of Peru. The language has more than two million speakers throughout the Latin American continent. The Andean regions of Peru, Chile, Argentina, and Bolivia enjoy being part of this wonderful native language. But in Peru, only 1.7% and 2% of the population speaks this language. It is the third most spoken language in the country. Along with Quechua, Aymara also enjoys being one of the official languages of Peru. And despite being a completely different language from Quechua, it shares many common words with this language. So linguists suggest that these two languages were related at some point.

HISTORY OF THE AYMARA LANGUAGE 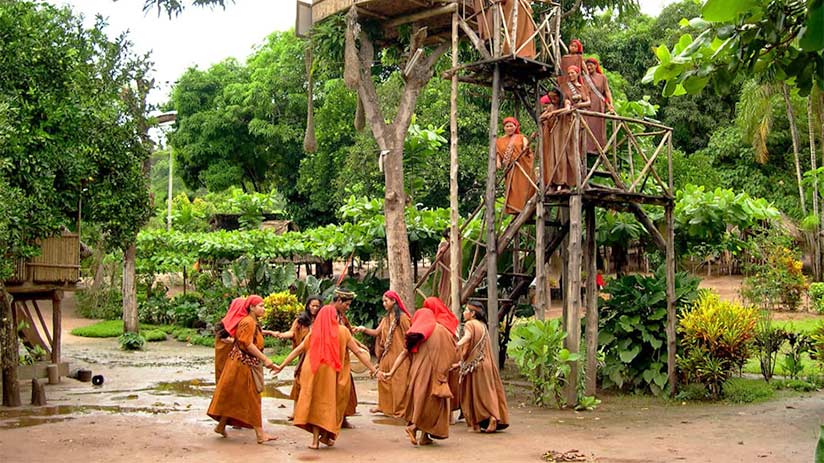 The language was originally a series of symbols, mainly pictures of people or things. These symbols represented the things they portrayed. There were many variations in the way the symbols were used. Besides, the symbols were never standardized. This also depended on the region. There are also many other languages including Jaqaru, Ashaninka, Aguaruna, Axinica, Caquinte, and Machiguenga to name a few. These languages are from many different parts of Peru but are not as spoken as Spanish, Quechua, or Aymara. Take advantage of tourism in Peru to learn about the different dialects spoken in Peru.

The Aymara language is also a very fun language to learn. Here are some basic words to give you an idea of this language.

One of the most curious aspects of the native languages of Peru is that they existed long before the territory was divided into the nations that we know today. So it is not surprising that some of Peru’s native languages are spoken in other Latin American countries. For example, the native Quechua language is spoken by more than 9 million people across the continent. An important figure considering the age of this language. The countries where this language is found are Bolivia, Ecuador, and northwestern Argentina. So Quechua is the most widely spoken native language in all of South America. While Aymara, another of the native languages of Peru, is also spoken in other regions of the continent. This ancient language is shared within the north of Chile, Argentina, and Bolivia. So these languages are shared in different regions that were previously part of the Inca Empire.

Another great fact to keep in mind about the language in Peru is the many languages that have disappeared in the last 40 years. According to a report provided by the Peruvian Ministry of Culture, more than 35 indigenous languages are believed to have disappeared. The languages that currently survive are known to be those that have withstood centuries and centuries of discrimination. This is largely because their speakers continue to use these languages in familiar settings and their respective communities. It is the activities of daily living that reinforce these languages within the respective societies.

And due to this growing loss of languages, the government has taken action through the Ministry of Culture. These measures seek the documentation and preservation of indigenous languages in the country. This process usually takes shape with the registration of the alphabet of each of the languages. With this form of registration and documentation, the government can develop educational materials for all areas and grades. All while promoting intercultural bilingual education in different institutions. It is one of the best ways that the different native languages of the Peruvian jungle continue to coexist.

“LANGUAGE IS THE ROAD MAP OF A CULTURE. IT TELLS YOU WHERE ITS PEOPLE COME FROM AND WHERE THEY ARE GOING.”

We hope, together with the experts from Machu Travel Peru, to have been helpful. Remember that you can enjoy our personalized tours throughout Peru. In some destinations, you will be able to distinguish the wonderful languages in Peru. Especially in destinations like Cusco, Puno, and other Andean regions. If you want to know more about our incredible tours, you can consult with our qualified advisors. Make sure you also get to know the Amazon rainforest and the many indigenous cultures that inhabit it. Explore our wonderful languages on an adventure tour made especially for you!